There is a large farm pond on the property adjoining mine which attracts all sorts of wild water birds - ducks, herons, the ubiquitous Canada geese, along with domestic ducks and geese.

One year they got a pair of black swans (cygnus atratus). Native to New Zealand and Australia, the black swan is basically monogamous, and mates for life. I was entranced with them and spent a lot of time photographing the pair as they swam together.

After some time, there was only the one swan, and sometime after that, there were none.  I have no idea what happened to either of them.  When our current word of "love" was offered, my mind fixed on lost love for some reason or another, and then I remembered the swans.

This one is based on my own photos, which I scanned in (those swans were there a long time ago, back in the film camera days), and then enlarged so I could trace the swan shapes on a lightbox.  The "ghost" swan is of tulle, glued just enough to hold it in place until I could applique it.  The fused "live" swan is of commercial fabric, as is the background. The red beak was done with Portfolio oil pastels and threadwork overtop. The writing and feather are drawn with a pigma pen, with further machine stitching on the feather. Everything is machine appliqued, machine quilted. 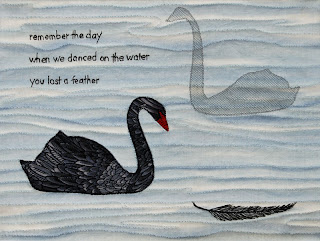 remember the day
when we danced on the water
you lost a feather
Posted by Martha Dennis at 3:09 PM

Martha
Further information on Black Swans~they are the bird emblem of the state of Western Australia. In fact when the first settlers arrived in 1829 they named the colony the "Swan River Colony" because so many black swans lived on the riverbanks.
I loved both your Haiku and the quilt...they revived many memories of my hometown.

Oh, this is beautiful - both the fabric piece and the haiku.

Maureen, I am happy to have reminded you of your home. My camera and I would love to see a whole flock of black swans.

Wasn't there some novel set in Australia that had Swan River or something like that in its title? I cannot remember...

This is really well done Martha... the Haiku is beautiful and so are the swans...I like your water!

Oh Martha your Haiku and your depiction are so beautiful, so tender - they tug on my heart.

Your haiku is beautiful! I really like your artwork, too. The ghost swan really looks ethereal.

Thanks for sharing in detail.