Another moon.  I've always wanted to do a series on the traditional full moons, so I reckon that's what you'll be seeing here now, since there won't be any more prompt words.

The Native American name for April's full moon is Pink Moon, called such after the wildflowers that bloom around this time of year in the east.  Other names are Sprouting Grass Moon, Egg Moon and Fish Moon, all of which reflect what's going outside in the spring.

I have cheated a bit on this one, in that I made this piece in early March and have written the current haiku for it.  In February, I took my first class at Quilt University, a class called Dyeing with Tea and Spices, taught by Marjie McWilliams.  It was a lot of fun playing with what was already in my kitchen to create colors on fabric and I've learned enough to be experimenting with what's growing out in my yard.  Over the weekend it was dandelion greens, which produced a fine pale yellow.  Intrigued?  The class will come around again in mid-July.

This was my final class project and all the fabrics in it were dyed by me.  The pink gradation was made from Tazo Passion tea.  Those blue birds were probably from berries, or perhaps red cabbage.  The yellow and greens could have been from a lot of things.  I didn't write it down, I was busy making it out of my new fabrics. 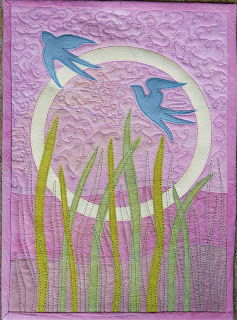 in the warm moonlight
spring blossoms cast a pink glow
as birds soar to mate
Posted by Martha Dennis at 2:28 PM

Martha, I love that you dyed all these fabrics and with natural ingredients. The colors are so beautiful. and I love the moon theme. I like to work in themes as well. You'll be seeing a lot of water and skies.

You captured so much movement in this quilt Martha - just lovely.
And you did a great job with the colors - congrats on being the most consistent finisher and poster. Yay!!