Greetings!  I'm so happy to join your group.  Two of my favorite things - art and haiku!

I don't have an April haiku and art piece but I thought I would share a peak of the quilt I made for SAQA's Seasonal Palette exhibit that will premiere in November at the Houston show.  They have asked us not to publish until after the exhibit opens but I can show a little sneak preview.  Just to give a little background on this exhibit and me . . . I'm new to SAQA, I joined in July of 2011 though I've been quilting for about 20 years, and this exhibit was the first members exhibit I tried to enter.  Submission to exhibit was a little unusual.  Artists had to submit a portfolio of four quilts, choose a season and explain why, along with an explanation of the technique to be used. They selcected 38 artists out of 147 but I think only 36 will be exhibiting.  We had six months to create the artwork which had a size requirement of 32″ x 78″ high.  Originally, I chose winter as my season but since so many of the selected artists did as well, about half, many, including myself were reassigned.  I got spring!  Plus, when writing my artist statement, I decided to write it in haiku.  It just seemed to fit.  So, my quilt and haiku do have a little to do with April especially with the very early spring we're having here in New Jersey.  Today, in fact, I saw my first iris!  In April!  So, maybe I do have an April haiku, two haiku in fact, and artwork to share.

My technique is simple:  I tear fabric into strips and collage it into a painting, then I fuse it down and then finally quilt it.  Even though it sounds simple enough, the collaging - the painting of the scene - takes a long time.  I use hand dyed fabrics and batiks that I collected for years.  Did anyone say fabriholic?

I realize you won't quite get the the first haiku because you can't see the entire quilt but I will post the whole thing in November!  Anyway, I hope you enjoy.

The title of the quilt is from one of the haiku: 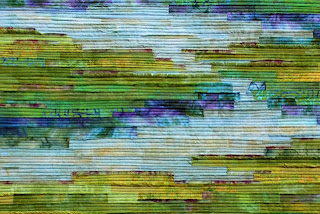 Elena, I love the colors in your piece! I can definitely see the shades of irises and the marsh grasses. Your technique is interesting and I look forward to seeing the entire quilt.

Thanks, Martha. Yes, I'm bursting to publish the whole thing. This is such a small section. Soon . . .

Elena, it's so good to see you here and posting. I love both of the haiku. So very descriptive and 'in the moment'. Not easy to paint such vivid scenes in so few words. Congrats on showing your work - can't wait to see it!