The strip piecing in the upper left began as an trial of a free rotary cutting and curved piecing method I ran into last summer.  When the small bit I'd done and the cut fabrics came out from beneath the piles on the cutting table at the new year's clean up, I thought I'd play with it some more and see where it went.  There was no plan ever.  The quilt told me what it wanted and that's what it got.

This quilt is 9 x 11.5" and is totally machine done.  I also tried a new facing method, which was easy but I still come out with those weird curved corners.  Leftover traditionalist that I am, I want those corners to be square.

I have also decided not to write the haiku on the quilt unless the design would be enhanced by the words.  I struggled with that all last year.  My handwriting is so sloppy,  that  no matter how hard I tried,  I felt I ruined some of my pieces with the lettering.

The original haiku I wrote for January was about the exhilaration to be found in working with a new method or idea:

But I liked what turned out so much that I thought it deserved a haiku of its own.  I want to make a larger piece like this, only I would satin stitch those fused rocks first, instead of quilting them on.


exhilarated,
a river rushing to sea
wears away rough rocks 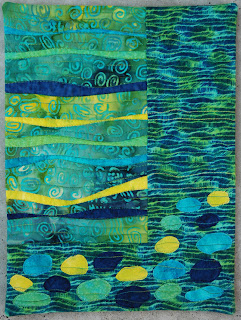 Posted by Martha Dennis at 8:59 PM

The composition and the colors in your art quilt are wonderful Martha. And the Haiku represents it very well. Great use of cutting table leftovers for sure.
Guila