The first thing that came to my mind when I saw our word for July was "The Ape Who Guards the Balance" (Amelia Peabody, anyone?)  A bit of research told me that the book title refers to Thoth, the ancient Egyptian deity who weighed the hearts of the deceased to determine their fates.

Using an ancient Egyptian god in a Japanese poetic form wasn't going to fly, nor did I want to make anything death themed, but those scales stuck with me.  Then I thought of juggling the things I have to do and the things I want to do.  I googled juggler images and turned up an Egyptian tomb painting of female jugglers.  Still ignoring the obvious sign from god to make an Egyptian sort of quilt, I came up with this one.

The juggler is based on the tomb painting (which is in the public domain), but the face and eye were modernized.  I drew the scales while looking at various scale images, and scanned a real skeleton key to trace.  They key bit came from a book-on-tape I was listening to at the time, can't think what now.  The line was "the key is balance".

Techniques include fused applique, stitched down with monofilament, machine quilting, and hand embroidery (the chains holding the scales).  The haiku is written with a Liquid Gold pen. 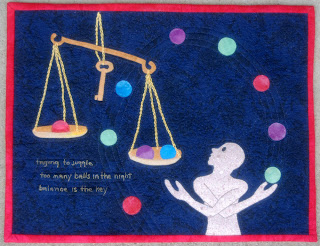 Posted by Martha Dennis at 6:51 AM

I am loving your "balance" haiku and how you arranged all the various elements in your art work.
Thank you for being so descriptive re your special effects.
Guila Greer
Honeyquilts

This is delightful Martha! I adore your 'juggler'. Perfect metaphor for 'balancing' all the balls of life. Well done

Martha, your balance piece is wonderful, and so very true.

I like this one - the quilting to emphasize the movement of the juggling balls is very effective. And Amelia Peabody rocks!