So here is my two haikus:

1.
A spark in the dark
stars and galaxies unroll
that's how all began

2.
A sperm in the dark
an oocyte is waiting
that's how we began 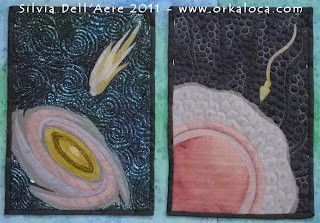 Comments are welcome :)
Posted by Silvia "OrkaLoca" Dell'Aere at 6:24 AM

As a fellow biologist, I greatly appreciate the parallels. A lovely relationship between the two quilts.

Very good interpretation of the 'word' and your artwork relationship is superb.

Wonderful Sylvia, I'm not a biologist but I do get the jest of what you are saying :) What techniques did you use to complete the dyptich?

Michele: I hope I'll be able to keep the parallelism along the firsts challenges. I'd like to build up a serie :)

Carole: thanks, you're very nice. I am not really happy with the galaxy appearance but I use challenges to try new things... sometimes they works, other times not :)

Rhoda: Hi and thank you Rhoda. Here are the techniques:
galaxy and oocyte: duppioni silk fused on organza, all stitched down on background.
Comet and sperm: simply cutted and fused "drop-shaped" silk pieces
space background: black silk with a layer of dark angelina fiber. (I wanted to try this stuff for a long time. I like it!)
oocyte background: quilted with variegated thread
I've added cells nuclei and shaded the oocyte with inktense pencils.
The cells around the oocyte are on a silk piece fused under the organza sheet.
Space piece

thank you Becky and Gloria :)

This is fabulous Sylvia! Your comparison of the 'Big Bang' of the universe to the 'Big Bang of human life is awesome....I love it! both art and verse.
Cherie

What great parallels! And you go from huge to personal. Nice work. Good quilting and use of color, too.

Like the other members I can relate to your parallels. Each haiku, as with each quilt complete the whole!