July's moon is called the Thunder Moon in most North American cultures. Appropriate that, given the prevalence of thunderstorms to dampen the fiery heat. Our prompt word for July arrived just days before the derecho. Whoever heard of such a thing? I personally had no damage other than some small limbs in the yard and a couple of hours of scariness. While a derecho is not so much a whirling wind, but more of a straight wind, I knew I wanted to try to make one.

The source image from the National Weather Service can be found HERE. (scroll down to almost the bottom of the page)

I tried making it with fabric. Twice. Both failed. It was too clunky or something. Then I tried sketching in the storm lines with pearle cotton in the bobbin, something I'd never done before. I like the technique and the textural effect, but the piece itself is weird. I thought maybe I could quilt it right, but that didn't happen either.

Even if I hadn't included the moon, it would still be weird. I haven't bound it. I don't like it enough to waste any more time or thread on it. Some things just aren't meant to be. I do like my background fabric though. The black streaks are meant to be flying debris.

Just for the sake of discussion though, if one of you had been trying to make this derecho map, how would you have gone about it? 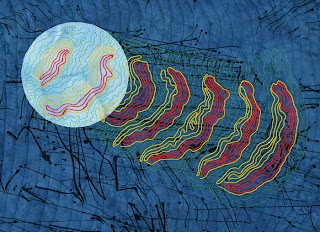 then the derecho
speeding down from the northwest
brings rain, at great cost

Posted by Martha Dennis at 8:39 AM

Hi Martha! What an interesting piece on so many levels. I'd never heard of a derecho and the weather site was so cool to see all those pictures of the sky and the various radar maps. Wow. I think you did a great job of capturing the derecho image of that photo. Love the background fabric, too. Did you create that?

As to what I might do . . . Julie Schlueter has an interesting twist to the slice and dice technique that I'm itching to try. Visit her blog at http://www.fiberdose.blogspot.com/. In her Black and White with a Twist piece is an example of how I could see to create the arcs of color in the derecho. And on her 'Sewn, Slashed and Sewn' page there are more examples that I can really see the effect I'd be after, especially the black, white and pink one. With the right colors, prints, etc. I can see creating jagged arcs that would look kinda cool. Hope that gives you some ideas!

Thank you Elena. "Interesting" would cover it. LOL

While the photos on the link I left looked sort of attractive, the actual storm left a lot of damage everywhere it passed, lots of people out of power for close to a week, lots of structural damage and a number of dead people - was it 8 or 11 of them - I can't remember now.

The background is a commercial batik. Thank you for the link to Julie's site. Her work is sort of bargello-ish, and something like that would have been very effective with what I was trying to do. I don't think I'll have another go at it, though you never know.

I hadn't realized that storm was so bad. I don't listen to television anymore, I can't stand all the political stuff so I just turned it off. I apologize for sounding so light about it.

Martha - there's a lot to like about your derecho piece. I really like the juxtaposition of the moon holding the rain back and the letting loose of the derecho. The only thing I may have done differently would be to vary the derecho imagery so that the individual elements are more diverse and haphazard. They're a little too orderly considering the havoc they produce. I think you do a good job of showing the derecho still not completely formed inside the moon image.
Maybe even add some more color as the derecho grow ?