The May full moon is most commonly called the flower moon, though a close second is the planting moon, which seemed appropriate for our current word prompt of awakening. Other names are milk moon, likely referring to animal mothers producing food for their newly born offspring, and the hare moon. Judging from the rabbits running amok in my front field, that seems appropriate. There were two out there this evening playing leapfrog. Or at least that's what it looked like. I expect they were playing at mating.

I am a gardener, of both flowers and food. It always intrigues me to see the power of a tiny dried up looking seed when it comes to life and pushes its sprout up through the soil. Beans in particular, which is what this one is if you didn't recognize it, disturb the dirt to the point where it looks like someone's been out there with a hoe.

This was made from a photograph, which I got by lying in the wet grass. Absolute dedication. What do you reckon the neighbors thought? Do I really care? I printed an enlargement, traced the outlines for a pattern and fused the fabric parts to make the whole. The pebble quilting in the dirt part is meant to illustrate the disturbed earth. That, and I have this thing for the look of pebbling, so I'm trying to practice it at every opportunity. I think I'm getting better at it.

I have had a hard time with the haiku, it's still not quite right. If I come up with better word imagery, I'll edit at it, so don't think you've lost your memory if it becomes different. 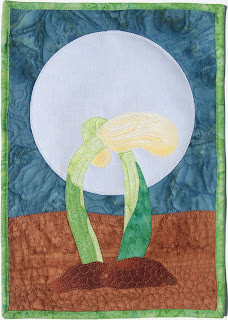 mysterious shapes
awaken in the moonlight
thrusting earth aside
Posted by Martha Dennis at 8:54 PM

Email ThisBlogThis!Share to TwitterShare to FacebookShare to Pinterest
Labels: Awakening, Martha Dennis, May 2012

Nice work, Martha! I like your pebble quilting. The neighbors? Let's give 'em something to talk about... :-)