No one knows the exact origin of the phrase "seeing the elephant" in conjunction with a journey.

Hindus consider it a good omen to see an elephant when one is traveling.  In the Hindu pantheon, Ganesha, who is depicted with the head of an elephant, is the patron of beginnings, the arts and sciences, and writing.  Ganesha is revered for his ability to remove obstacles, though he has been known to place those same obstacles in the way of those who need to be deterred from the paths they have chosen.

Historically, Alexander the Great defeated an army mounted on elephants during his campaign in the Indus Valley in the 3rd century BC.  The ancient Greeks used elephants in war, as did the Seleucids of eastern Macedonia and the Egyptian Ptolemaic dynasties.  The Carthaginian general Hannibal drove an army of elephants over the Alps in 218 BC, though most of his elephants didn't make it.

In these early encounters, those who "saw the elephant" would have likely been awed and frightened, unless of course, they were those fielding the war elephants.

Charlemagne was intrigued by stories of the massive beast and managed to acquire one of his own for his palace at Aachen (Aix-la-Chapelle).  People came from all over to see this marvelous animal.

In America, there were traveling circuses which often included an elephant, and the inhabitants of the towns which these shows visited would ask each other if they "had seen the elephant".

When American settlers began to move west in the early 1800s, their letters and diaries often mentioned "seeing the elephant".  In the early years of the westward migration, the phrase denoted excitement at seeing new places and anticipation of a better life ahead.  In later years it became more common as a description of discouragement when the hardships of their journey turned out to be more than they could bear, or when their destination eluded them.  Indeed, many of these immigrants turned back in their defeat.  During the Civil War, soldiers would refer to a battle they had been in, or an upcoming one, as "seeing the elephant".

I have chosen this elephant to illustrate our journey word this month because I think all of us who create have met our own elephants along the way.

My elephants this month were an earthquake and a hurricane, neither of which did any real damage here, though that first elephant made quite the bad impression on one who had never even considered worrying about such a thing, and stopped forward movement for over a week.

This piece is 8.5 x 11", machine appliqued and quilted.  The background design is my own drawing, and the elephant was machine embroidered prior to the quilting and is based on an elephant drawing in the public domain, from wikicommons.


when following dreams
the journey must continue
past the elephant 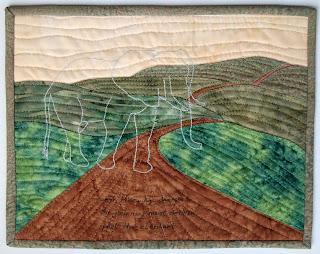 Posted by Martha Dennis at 3:42 PM

I like this a lot Martha; both your haiku and your art. I really love how you've superimposed the outline of the elephant over your beautifully quilted landscape.

This is wonderful Martha! I love both the art work and the Haiku...and thank you for the in depth essay on the 'elephant in a journey'. Delightful!
Have fun with your new machine
Cherie

lovely haiku -- and thanks for the history lesson!

great history lesson! It certainly gives one food for thought and you have captured it right on. Loely