Yeah, I'm late. Really late. Later than I've ever been before. You don't want to know.

In Algonqian lore, June is known as the strawberry moon. Unlike other months, there are no alternative names in North American cultures. Here in Virginia, strawberries used to peak in June. Now it's more like May.

It took me about forever to work out how to make the strawberries, since I don't have any photos, so in the end, I just looked a a bunch of other people's strawberry pictures and went for it.

My little quilt is collaged and fused and machine quilted. I decided to try an over layer of tulle because of the serate edges of the leaves and the fraying of the red fabric. I tried various colors of tulle and settled on red in the end, since it gave a pink glow to my moon, and weird as it was to think about, I rather liked the effect.

This piece is 8 3/4 x 7 3/4. It was originally 8 3/4 by 11. There were the most wonderful moonlit reflections off the clouds, and a whole full moon too. You'll have to imagine it. Tulle melts, given a way too heavy hand with the iron in pressing the binding to the front. 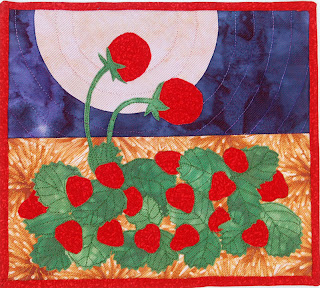 under the June moon
strawberries are ripening
sweet treat for breakfast
Posted by Martha Dennis at 9:00 PM

Martha, too bad about your clouds but I rather like how your accident influenced the composition of this one. Pink moon - maybe it's blushing after being kissed by a strawberry! And now that my appetite is wetted, I'll go have breakfast.